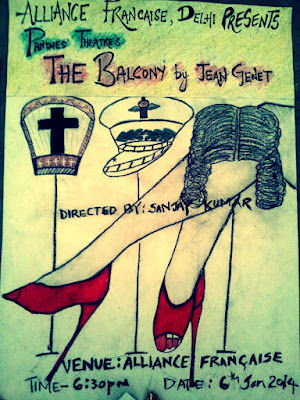 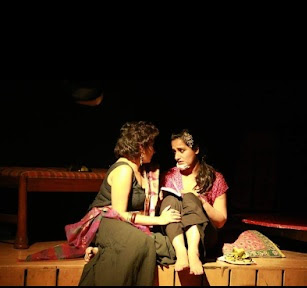 For pandies, Genet’s The Balcony forms a periodic return to adapting radical classics that never lose relevance and are probably as if not more relevant today. The play was staged earlier in 1991, while the group was still in a formative stage.

Hailed variously as avant garde, a pioneer of modern theatre, an inspiration  and reference point for LGBT theatre and the French Brecht (though we feel that his place is as radical but different from Brecht), Genet is central to the canvas of activist performance. No research on contemporary drama and no contemporary practice is complete without reference to him.

The Balcony remains the most engaging exploration into the relation between power and the market. Re-formulating the pillars of medieval authority - bishop, general and judge in Irma’s Balcony and intervening with the Chief of Police, the play seamlessly presents the nexus of power and its continuity as we move from the medieval to the modern state. Is any kind of radicalism, any change possible? The play posits the question in the face of the audience.

pandies’ production was mostly in English (about 10 percent in Hindustani) and used Bernard Brechtman’s second translation as its base text. Directed by Sanjay Kumar, the play was premiered on a terrace in Vasant Kunj and subsequently three shows were performed at the Alliance Francaise in early 2014.