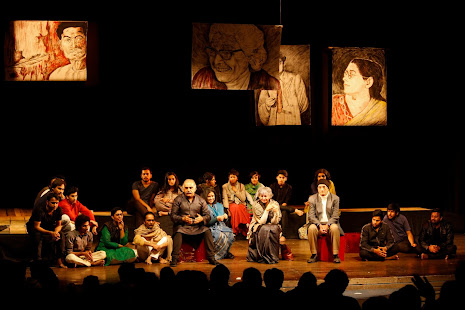 This play performs the contemporaneity of three iconic writers: Premchand, Manto and Chughtai.

Premchand’s espousal of the rights of the low caste farmer poses a question mark on the spate of farmer-suicides in contemporary times.

Manto’s powerful voice opposing all forms of communalism and bigotry provides an ironic critique of our inabilities to take a position on our religions.

And Chughtai’s feminist formulations challenge not only patriarchal constructions but also expose the limitations of the liberal masculine.

The play captures the mercurial relationship between Chughtai and Manto, their agreements and differences not only regarding the emerging nation and society, but also about women who love and men who betray.

Directed by Sanjay Kumar, a popular production it worked both in the regular auditorium and in Colleges and for special courses in universities.