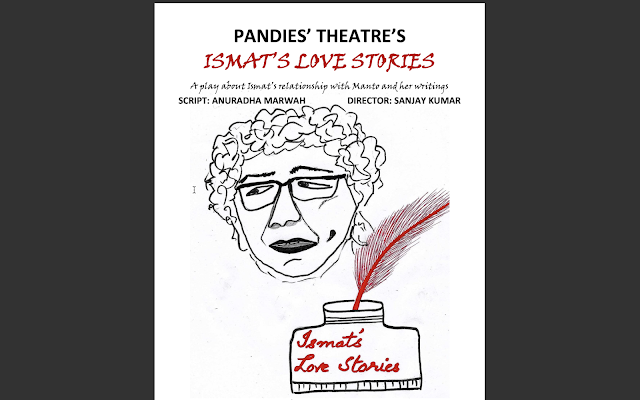 In the annals of Indian literature and women’s writing, the name Ismat Chughtai (1915-1991) is synonymous with ‘Lihaaf’ (The Quilt).  This short story - about the sexual liaison between a begum and a woman retainer - outraged and titillated Urdu readership when it first came out in 1942 and then went on to become the archetypal text of Indian lesbian literature. Ismat Chughtai continued to write for almost forty years after this early-career offering. However, the folds of the quilt may have served to obfuscate her mature, more substantial works not only throughout her life but, perhaps, till the present time when there is renewed interest in her oeuvre.

The play ‘Ismat’s Love Stories’ has two objectives: the first is to recast Ismat Chughtai as an instinctively feminist writer whose work is still relevant today. The second is to explore her relationship with Saadat Hasan Manto, who enjoyed shocking people with his outrageous observations and explicit writings. In the early forties there were rumours of a romantic liaison between these two major writers. In 1948 Manto migrated to Pakistan – a move denounced publicly by the patriotic Ismat. Subsequently there was a breakdown of communication between them. Manto was attacked and reviled by Islamic clerics and ignored by the literary establishment in Pakistan, while Ismat, partnered by her producer husband, Shahid Lateef, wrote successful film scripts and scenarios for Bollywood. But Manto’s tragic death in 1955 drove a heart-broken Ismat to ally herself strongly and publicly with her iconoclastic friend. Her essay on him ‘My Friend, My Enemy’ is a moving tribute to his genius and to the vocation of writing.

The script is particularly inspired by the following works: